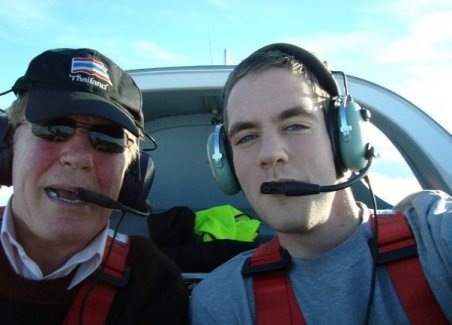 When did you join Waterford Aero Club? I honestly can’t remember exactly when, but it was back when I was 12 or 13 I formally joined the aero club as a junior member.

Best flying memory: Thinking back there are so many good flying memories I can’t pick one. Some of the highlights would be flying my first solo at the age of 16 and coming in to find my mother was more of a nervous wreck then me, any aerobatic flying that i’ve done, flying the PC12 that was based here, gliding, jumping out the back of a perfectly good PC6 porter from 14,000ft. I’ve been really lucky in being around the aero club for all these years that I’ve had the opportunity to do and experience as much as I have so far.

Worst flying memory: I’ve been very lucky in that I can’t recall any times that I’d consider a “worst” flying memory. I’ve had some situations like an alternator failure on a solo flight but anything out of the ordinary that happens is a means of learning new things.

Tell us about your last flight? A solo circuit detail in order to maintain my currency in the club aircraft. 5 circuits consisting of glide approaches, engine failure after takeoff, landing with various flap configuration and a short field landing to keep in practice. I like to keep in practice with emergency procedures in case of the something going not to plan.

What brought you to flying? I blame my Dad and my Gran Uncle. My Gran Uncle is a piece of the furniture at the aero club, he’s been there from the early days, I remember when I was very young him and my Dad used bring me out there every so often to airshows and aerobatic competitions, I guess thats something that gave me the passion for it. My first ever light aircraft flight was with Paul Hutchinson (Who had just qualified as a PPL and went on to be my instructor) in EI-BSO, a Cherokee 140, from then I was sure flying was for me. Being a petrol head who likes pretty much anything that burns petrol and makes noise or moves fast I had to get in to as soon as possible. I flew my first solo when I was 16, got my licence then about a year or so later after that and I’m hoping to make a career out of it.

If you had all the money in the world, what aircraft would you choose to fly? P51 Mustang, Cadillac of the Skies!

What is your current job? Currently working full time as an agent in the Member Services Team for TalkTalk Group Plc.

What do you like most about the Aero Club? The people. You will never find such a broad diversity of people in one spot, you have doctors, school kids, professional pilots, scientists, teachers, general workers, students, everyone brought together. The stories, the camaraderie, everyone is friends and just happy to be in the one place sharing their passion for the one thing.

If you could give a new pilot one piece of advice, what would it be? As one of my instructors Norman Whelan said to me one day, “Just do it.”