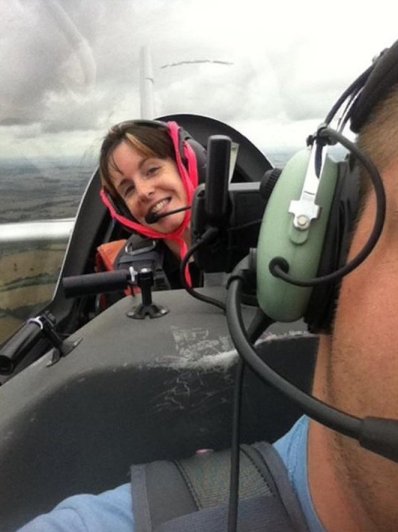 When did you join Waterford Aero Club? I first visited the Aero Club in February 2006 and joined shortly afterwards.

Best flying memory: Any time I’m in an airplane, I’m a pretty happy person, but there are a few flights that really shine for me – I can still remember my PPL test flight vividly and I always felt it was a more triumphant landmark than my first solo. The first time I flew solo at an aerobatic competition still gives me goosebumps – it was at Leicester airfield last year and I was flying an Extra 200. I remember taking off and entering an airborne holding pattern to wait for the pilot ahead of me to finish his sequence so that I could fly mine – as I circled I could see his yellow Pitts pull up into a stall turn against the blue sky. It is very surreal to watch someone doing aerobatics from the air!

Worst flying memory: Thankfully I have had no “scary” experiences during a flight. There have been some questionnable-weather moments but nothing to make me go pale and give up flying!

Tell us about your last flight? I flew a Piper Cub from a drag car racing strip in Tullow down to ILAS airfield in Wexford to do some much needed circuit practise. Brian O’Keeffe was the back seat driver.

What brought you to flying? There is no history of flying in my family but I think I inherited the speed-freak gene from my Grandmother who was an extremely strong-willed and adventurous person. I live close enough to Cork airport to appreciate the training activity that happens there so I called up to the school (Southaer at the time) to see what was involved in getting a private licence. I initially had notions of joining an air force but quickly learned I needed to be about 2 inches taller to be in with a chance. During my PPL training, when I was fed up with circuits, I used to fly other aircraft and tried aerobatics a few times and absolutely fell in love with it.

If you had all the money in the world, what aircraft would you choose to fly? CAP 232 to make plenty of noise and to fly upside down!

What is your current job? Studying full time for a PhD in experimental physics.

Other hobbies? Web design, art, drag racing… But none of them compare to flying.

What do you like most about the Aero Club? The best thing about the aero club, as everyone has mentioned, is the collection of people who fly there, the flying stories you hear on a Sunday morning when the weather is bad and the advice and encouragement you get from the instructors.

If you could give a new pilot one piece of advice, what would it be? Take every flying opportunity you can get because that’s the most efficient way to broaden your skills and improve yourself as a pilot.